skip to main | skip to sidebar

Here is an email update from Dr. Cissa Wa Numbe, Director (Secretary General) of UN Association of the Dem. Rep. of Congo:

"I just returned yesterday in Kinshasa from Kivu (Goma and Bukavu) where I have been leading and coordinating the free distribution of the bed nets we bought as the result of your help and support. I will be sending you the report and photos as well about how well things went. It was one of my favorite times and work that I have ever enjoyed ever in my life.I can tell you, seeing pregnant women and those carrying their babies smiling after receiving a free net....was amazing and fabulous.


While the need is big, we did what we could. We did our best but many women and children in need didn't receive the nets. They are appealing to us once more to provide more nets as malaria is the biggest killer in the region.

We distributed in mostly 22 villages and about 1800 people received nets, but if you consider that some parents share beds with their children, we can estimate that more than 2000 families were indirect beneficiaries. In addition to distributing nets, we organised workshops and awareness raising about malaria and the use of treated bed nets.

The Congo Cause is still asking for your help with this project, as UNA-DRC has a balance to pay for the nets. Please visit the site for more information about how you can help save lives of families in eastern Congo.

Diane
Posted by Amani_blog at 8:12 AM No comments:

CNN's Cooper Anderson has an excellent article on his blog. (And his video aired on CBS 60 Minutes on January 13, 200).

Please visit Cooper Anbderson's blog 360 for the article, "War Against Women in Congo."
Posted by Amani_blog at 6:17 PM No comments:


This page has been translated and interpreted into English from French.

As part of its program to consolidate peace and security and the prevention and resolution of conflicts, the United Nations Association of the Democratic Republic of Congo has supported Lubunga Lwilondji, which is a group of community leaders and activists for peace through their program for the promotion of culture. The objective is to promote the values of traditional culture in favor of the action of peace, solidarity and inter-community reconciliation. 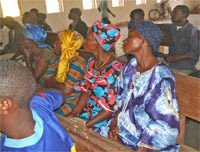 The forum which was opened in Baraka, Fizi territory, is a rural area affected severely by the civil war and armed conflicts that have ravaged the DRC since 1996. The majority of the people of this territory consisted of refugees and internally displaced persons. But with the support of the United Nations through the United Nations High Commissioner for refugees, the repatriation program underway has already brought back more than 150,000 refugees and internally displaced people
. 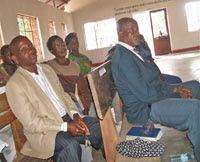 The population of this part located in the southeast of South Kivu province has a very rich cultural history in the field of peace and reconciliation between communities. The story that are shared and passed down to people of the ethnic groups in this part of the republic are stories of how they lived in harmony. Communities were guided by the principles that provided the framework for social, administrative and political structure. It turns out that the system of good governance, equitable and inclusive participation of every individual and group were dedicated since ancient times. These people had mechanisms for the prevention and resolution of conflicts; and they were responsible for ensuring that their ethnic groups lived in harmony not only among themselves but also with their immediate neighbors.

It is these values and principles that these traditional cultural communities feel they have lost; and which the leaders and activists and Lubunga Lwilondji believe to be the source of ills afflicting their communities and the country in general. In these matters, ANU desires to support and facilitate a recovery and restoration.

A team of ANU-RDC consisting of its President, Joshua Bolenge, its Secretary General, Cissa Wa Numbe, accompanied by Malcolm Harper who participated as an observer. ANU assisted with some financial and logistical support.

The executive board of Lubunga Lwilondji, composed of Bahombwa Wa Numbe, coordinator, his deputy Shomari Alenga and other members (listed by the end of the report) were identified and selected participants including heads of groups, from traditional sectors and also other resource persons including women and notable village chiefs.

The representatives who were present included 100 participants from different localities (Lulenge, Ngandja, Mutambala and Tanganyika) constituting the Territory.

A very remarkable presence was that of a traditional chief custodian of the culture Bembe, a person of respected age and wisdom in the territory. This invited senior leader, highly respected by his own community explained how the people lived in former times old and the way he solved conflicts in an amicable manner and without prejudice.

1. The story of immigration and the division of clan people M'mbondo;
2. The tradition M'Mbondo and the system of good governance: Gender, inclusiveness and participation of all in decision-making mechanism
3. The responsibility of parents (father and mother) in education of the children;
4. The belief in the divine and its relationship with the ancestral power;
5. The various beliefs that exist; and the relationships between sorcery, fetishism, and charlatanism;
6. The value of marriage in the tradition Babembe M'mbondo on the success of the family
7. The clans that make up the ethnic M'mbondo and the hierarchy of customs and power
8. The prevention of conflict; peaceful resolution of conflicts, peace-building, reconciliation, and coexistence.

After presentations, the speakers answered questions, and the discussions met with the satisfaction of the audience. Women in equality with men, all had the opportunity to exchange ideas and ask questions about various topics of discussion presented that day.

At the end of the discussions, the participants made the following observations and recommendations:


It is a noted that the momentum of support and promotion of traditional culture is part of the vision and the program's research. ANU-RDC aims to unearth and find a excellent and effective reviving cultural and traditional values. The former carriers of the roots of peace, tolerance, reconciliation and morality were able to remain today by ignoring or abandoning the profits of certain acculturation or practices imported through either religion or politics, thus avoiding modernization or westernized contempt of African identity and the devaluing of black people.

The goal of this program and also ANU is to conduct research that would identify those good cultural and traditional practices that can inspire, inform and develop added values based on the principles currently used by the Peace Missions of the United Nations Africa and DRC in particular. Because it is clear that very often plans originating from New York or Geneva (or from other strategic centers in the West) do not always effect solutions on the ground. The lack of results are from ignorance, or not taking into account some realities (such as the need for Culture and Traditions); or a neglect to include the local values and traditions in the strategic planning and implementation of practices and strategies for building peace and conflict resolution.

ANU promised its support and also thanked all the participants and Lubunga Lwilondji who have so ably organized this first-time event even with very few resources. Editorial submitted from ANU Secretariat General.

Click here for French Translation
Posted by Amani_blog at 5:57 PM No comments:

Labels: Report on the Forum of the People October 2007

AmaniDRC is in the prototyping stage.

In the future, we'll we adding content related to D.R. Congo including discussions, photos, courses, and information.

Take a look around and let us know what you think. www.amanidrc.org
Posted by Amani_blog at 10:40 AM No comments: